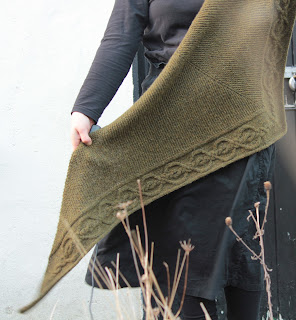 Introducing my latest pattern, the Turas Shawl. This has been recently released as part of Stolen Stitches' Celtic Knits Club, and is available to purchase through the digital club option at this link.

Turas (Irish for 'journey') is a symmetrical triangle, worked from tip to tip, featuring garter stitch with a cable panel, and using short row shaping. Worked in Stolen Stitches Blasta yarn, it is so very cosy and perfect for wrapping up on cold days.

Blasta is a beautifully woolly DK yarn, produced by Donegal Yarns, using 60% Irish fleece. The yarn is woollen spun, and dyed in the fibre before spinning, which gives a complex heathered colour blend in the finished yarn. It is available through Stolen Stitches at this link. 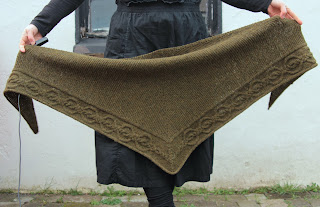 The pattern was inspired by the question 'What does Celtic mean?'

The continuous cable motif, flowing from simple rope cables, into braids and then into travelling stitches, was intended to represent a journey, both literal and metaphorical:

The Celts were groups of people who lived throughout the European continent, over quite a long time, from roughly 500 BC to 400 AD. The definition of ‘Celts’ changes depending on whether you define ‘Celtic’ based on language, historical record, or archaeological evidence. People moved, traded goods, and shared ideas, and culture evolved over many generations. Historial accounts, written by the Greeks and Romans, were flawed. The Celts were often portrayed as barbaric but fierce - difficult foes to face, but no match for the civilised discipline of the Roman Empire. 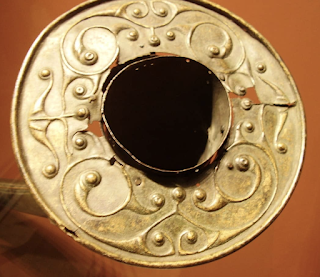 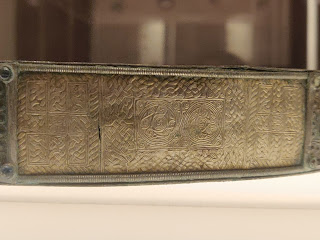 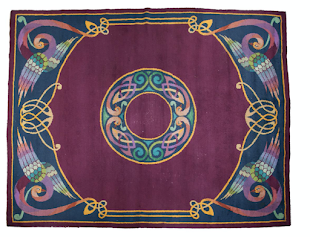 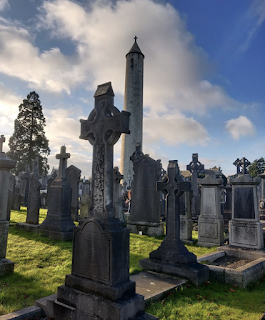 These motifs inspired craftspeople during the Celtic Revival of the 1800s and early 1900s: the Dun Emer guild produced beautiful textiles inspired by the interlacing strapwork on earlier manuscripts in the early 1900s, and there are countless numbers of high cross-inspired grave markers in Glasnevin Cemetery, with dates ranging from 1860 - 1960 (and probably beyond).

In our schools today, children are taught the Irish language (a Celtic language, with striking similarities to Scots Gaelic); stories of Fionn MacCumhaill and Cuchulainn (passed on orally, and eventually written down once Christianity - and writing - came to Ireland) are part of the primary school curriculum.

So back to the question: what does 'Celtic' mean? It’s complicated, and changes depending on the context. I think it can be nicely summed up by a quote from Alice Roberts:

‘The Celts are different depending on how you define them - archaeologically, historically, artistically, linguistically. You can see why some archaeologists advise against using the C-word at all. And yet, if we’re interested in the spread of ideas, and how culture evolves, it’s still useful to try and track all those fluctuating aspects of ‘Celticity’.

The cable motif on the Turas shawl was intended to represent that complication - the movement of people and ideas, trading of goods, and evolving cultures - in woolly form. Multiple cable motifs are combined in a continuous cable panel - simple rope cables flow into braids and travelling stitches, and back again. The garter stitch body allows for a bit of a rest between cable stitches, and creates a cosy, squishy fabric. Nice & cosy for a cold winter's day. 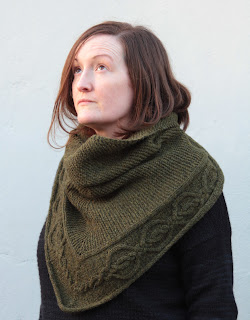 Alice Roberts, The Celts: Search for a Civilisation.