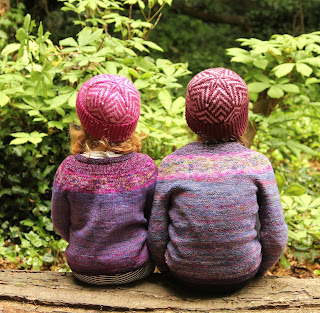 Introducing my new pattern, the Roinn Hat.
The Roinn * hat features a stranded colourwork motif, loosely inspired by Bronze Age artefacts found here in Ireland.
* "reen/rine/rin" depending on dialect, meaning to divide, share or separate in Irish.
The pattern is worked in the round, in two colours, with guidance for working a standard or folded brim. 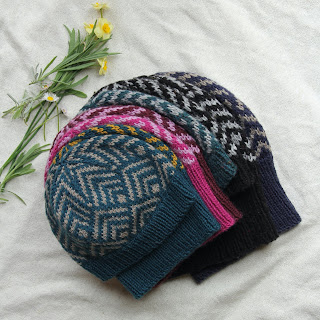 The Roinn Hat is designed in four sizes, graded by changes in gauge. The samples are worked in Aran weight yarns, woolly, that work well at multiple gauges. DK or Worsted weight yarns could also suit the pattern, depending on the size worked. The yarns used in the pattern are wool fibre content, with a somewhat fluffy, woollen texture (compared to a smooth or slinky silk, or rigid cotton, for example), and can bloom or compress to different gauges, without being too gappy or too stiff.
This pattern was inspired by my failure to translate simple engraved designs into knitting charts. After some tinkering, and mirroring, I came up with the 'Roinn' chart, used in the Roinn Cowl. With further tinkering and sketching, I adapted the Roinn chart to fit a decreasing hat crown. The graphic star that adorns the crown was a very happy accident.

I had spent some time deliberating over how to present the gauge information for the ribbing.  Should I measure relaxed, or stretched, or 'average' ribbing fabric? How can I make sure the knitter can replicate these results? While swatching & working on samples, I noticed that ribbing behaves very differently, depending on the texture of the yarn used, and the length of ribbing worked. I decided not to provide a gauge for the ribbing. Instead, the pattern lists stocking stitch gauge, to help determine needle size for the ribbing at the brim. 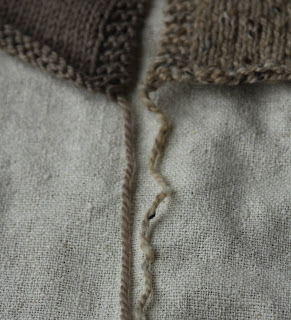 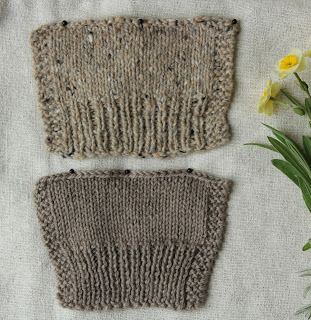 The photos above show comparison of the yarn, and swatches, used in the samples:
Rico Essentials Soft Merino Aran, shade Pebble(100% Superwash Merino Wool, 100 metres per 50g).
Studio Donegal Donegal Wool Spinning Company, shade Oatmeal (100% Wool, 200 metres per 100g).
Studio Donegal Soft Donegal is a woolly wool yarn, with two plies; woollen spun, with tweedy neps and thick & thin areas of yarn. The Rico Soft Merino Aran is relatively woolly for a superwash yarn: it has multiple plies and a consistent thickness. Both the fibre content and yarn structure give a smoother, slippier yarn when compared to the Soft Donegal.
In the swatches shown above, both yarns work to the same gauge in stocking stitch, when worked on the same needles. They behave very differently when worked in 1 x 1 ribbing: the smoother yarn makes a much tighter ribbed fabric. My best guess is that this is due the slippy vs grippy difference between the two yarns, and that the grippy bumpy yarn does not move in multiple directions quite so easily. 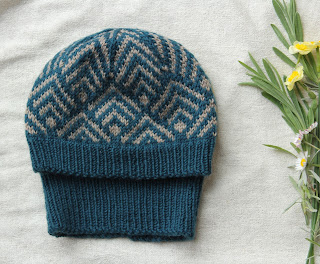 The above photos shows Size 1 samples in both Standard and Folded brim lengths. They are worked in the same yarn base, on the same needles. The colourwork gauge is the same. Yet we can see that the longer ribbing, when relaxed, draws in to a smaller circumference. Or, with the longer ribbing, the ribbed stitches are further away from the colourwork fabric, and are not being pulled out quite so far. 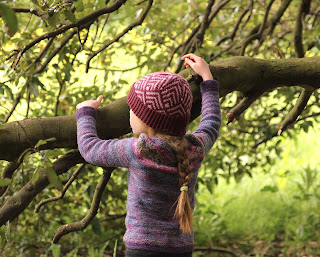 I also learned a lot about bribery, and how best to convince children to cooperate with taking photos. Sometimes it's best to pay them, preferably in ice cream, and sometimes it's best to take photos while they are just getting on with being kids.
Roinn Hat is available to buy through Payhip here or Ravelry here. You can avail of a 20% discount by using the code 'NEW', until Monday 23rd August.
The Roinn Cowl is available through Payhip here or Ravelry here.
And as for the failed engraving translation? It became a whole other thing, to be shared soon.
Labels: irish design irish yarn knitting pattern made in ireland new design plays with fibre Rico Essentials Roinn Hat Studio Donegal studio donegal yarns