Re-introducing the Taisce cowl!
This cowl was originally released as part of Stolen Stitches' Celtic Knits Club 2021. It is now available as a single pattern, so we might as well have a bit of a chat about it.
Taisce (pronounced tash-keh, Irish for hoard or treasure), is inspired by artefacts from the Golden Age of Irish Art. We tend to use the term 'Celtic' Design to refer to interlacing ribbon motifs, featured on many artefacts from the early Christian Era in Ireland.
Items such as the Ardagh Chalice and Derrynaflan Paten, were made in the 8th or 9th Century, and consist large areas of smooth polished metal, with contrasting smaller areas of highly decorated surfaces. Some of  these decorations include interlacing ribbons, which also bear a remarkable resemblance to some cable patterns typically used in Aran knitting, during the 20th Century. 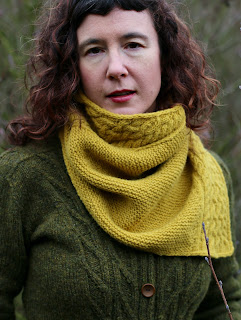 Beginning with just a few stitches, Taisce is worked flat, and seamed.  It features a cable panel, which hangs diagonally against a garter stitch background. Shaped using gradual increases, and short rows, the cowl also features integrated I-cord borders, and an I-cord bind off.
The sample is worked Stolen Stitches Blasta, in the shade Oir - a fabulous golden yellow, appropriate to the inspiration. This yarn is spun by Donegal Yarns, using a mixture of Irish and New Zealand fleeces, and is beautifully woolly, with delightful stitch definition. 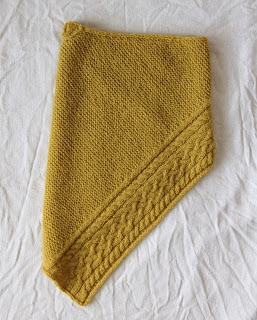 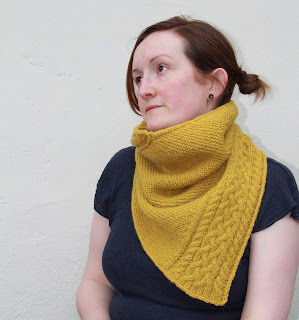 Taisce is available as an individual pattern from my Payhip Store here or Ravelry store here.
The pattern is also available as part of a detailed video workshop here.
Yarn kits are available from Stolen Stitches here.

You can read more about the inspiration and thought process behind this design on Carol Feller's blog here.
This blog post includes photography by Joseph Feller.
Massive thanks to Carol & the Stolen Stitches team for yarn & moral support!
Labels: Blasta new design plays with fibre stolen stitches Taisce Taisce Cowl